Kenya is a country which is located in the eastern Africa, and its also called as the country of languages. Kenya is famous for its wild-life preserves, and hunting is also illegal in Kenya, which is considered as a crime to hunt a protected animals, Kenya was considered as World’s Leading Safari Destination in 2017, went on to winning the award for three years in a row. Kenya is a country of of tropical weather, white sandy beaches and lazy afternoons out in the sun enjoying a cold beer and looking out into an amazing landscape.

Kenya covers the total land of 580,367 km², which has ranked 48th among other nation in terms of land area. Kenya is bordered to the north by South Sudan and Ethiopia, to the east by Somalia and the Indian Ocean, to the south by Tanzania, and to the west by Lake Victoria and Uganda.

Kenya contains the total water percentage of 1.9% comparing to the other nations in the world, The main source of water is from the wells. Kenya receives water from Lake Natron, Lake baringo etc.. but the main problem for Kenya is they’re only having 1,000 cubic meters, which determines the nation as a water-scarce country.

Kenya has a total of 3,856 named mountains, The seven most prominent mountains in Kenya are listed as follows; Mount Kenya, Mount Elgon, Mount Satima, Chepunyal Hills, Cherang'any Hills, Mount Kulal, and Mount Ng'iro. The highest ranging mountain in Kenya is Mount Kenya which elevates up to 5,199 m.

Kenya uses 5 digit pin code system in which each digit has its own indications which is shown precisely below; 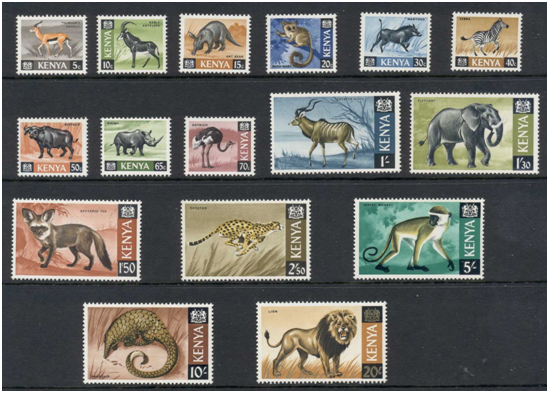 The above shown picture is the basic postage stamps which are currently being used in Kenya and the prices of these stamps are shown in the above picture.

The postal and courier service company list in Kenya